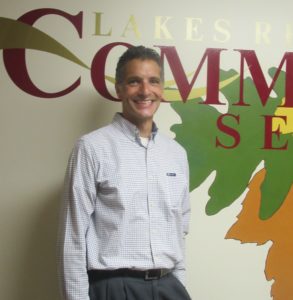 Lakes Region Community Services recently announced that Jim Hamel has joined the organization as their new Vice President of Development.  He will succeed Joanne Piper Lang who will be retiring at the end of July. Lang has been with LRCS since 2012, having functionally started the Development program there.

Mr. Hamel earned his Bachelor’s degree at Plymouth State College and a Master’s degree from the University of South Carolina; he comes to LRCS with a broad background in fundraising and nonprofit management—as well as a private business owner and entrepreneur.  He got his start in Development at Boston Community Capital in the late 90s, later moving into a similar role as Director of Investor Relations at the New Hampshire Community Loan Fund.  Subsequently, he led the New England office of a global youth social entrepreneurship nonprofit, Youth Venture, based in Washington D.C., and later more locally, was Executive Director of the Franklin Opera House.

He spent much of this decade in the private sector, having purchased and operated the Meredith, NH Allstate Insurance office, and worked on several local real estate investment projects.  But he discerned that the nonprofit sector is really where his heart is, and so he committed this year to return to Development work, where he has had the most impact and reward professionally.

“I have such an appreciation and respect for the work of nonprofits as part of the fabric of the communities we live in, said Hamel, and it’s a real privilege to again work in a role that fuels and strengthens the work they do.  LRCS is particularly impressive in the scope of its work and impact, and I’m excited to help facilitate how the community can express its value for inclusiveness, dignity, and opportunity for all of our citizens.”

Hamel will support LRCS’ traditional fundraising efforts and events, including the signature event, Lakes Region Uncorked, and will focus particularly on the launch and evolution of the LRCS’ Legacy Society.  The Legacy Society recognizes the philanthropic leadership and vision of donors that commit support to LRCS by including it in their will or other estate planning; the Legacy Society will enable LRCS to build an endowment and a funding stream that provides long-term security and greater nimbleness in delivering the vital services that LRCS provides.

“We are fortunate to have many friends as donors to our work, and with them, Joanne has been absolutely vital to the growth and organizational impact we have achieved; we wish her much well-deserved happiness in her retirement,” said Becky Bryant, President & CEO of LRCS.  “Jim brings a strong background and energy to further advance the foundation she has helped to build here, and we’re excited to welcome him as part of our executive team.”

“I’ve been very fortunate to have had wonderful and diverse opportunities in my professional career. It seems very fitting for me to be retiring from LRCS in a position that has been a career capstone in terms of what I feel I’ve been able to contribute to further its mission,” said Lang.  “The organization is full of real life heroes with amazing stories and I’m gratified to have played a role in supporting the work and impact they achieve every day. I’m leaving a bit of my heart here.”

All Parent Ed classes, Giggles & Grins Playgroup and Happy Sounds have been cancelled until Monday May 4th. Thank you for your understanding